The CIA’s Bluff Has Officially Been Called

The Intercept's offer to publish proof of Russian election tampering means there's an open invitation for anyone in the CIA to do so.

Thank you sweet baby Mall Santa for The Intercept. The latest state propaganda pieces being circulated by the Washington Post and the New York Times have been producing a face-shaped indent in my desk where I’ve been slamming my head with a percussive intensity to which you could record studio-quality Led Zeppelin covers, so it’s nice to have the brief respite of some occasional journalistic integrity in my world.

This morning The Intercept’s Jeremy Scahill and Jon Schwartz published this glorious article titled “Obama Must Declassify Evidence Of Russian Hacking,” arguing that since intelligence agencies have such an extensive record of lying to the American people and getting things so spectacularly bass-ackwards wrong, it is the President’s duty to provide the American people with undeniable proof of the alleged Russian conspiracy to get Donald Trump elected.

But they didn’t stop there. They then proceeded to provide a link to their secure drop with the invitation for a “patriotic whistleblower” to leak proof of Russian election tampering to them, which they will publish once verified.

The Intercept has an extensive history of not only advocating for whistleblowers, but for working with them. Just reading about Glenn Greenwald’s collaboration with Edward Snowden to release the NSA surveillance leaks provides a clear window into how honest, professional and trustworthy these people are, as does the mutual respect Greenwald and Snowden have for each other. A patriotic whistleblower could not possibly ask for a better resource to drop evidence of Russian election tampering, if indeed any such evidence exists.

So there it is. Any of the many, many people involved in the CIA, along with the anonymous source who told the Washington Post about the unproven findings of its “secret assessment”, now has the ability to provide hard substantiation for this extremely serious allegation to the American people. If it was so important that they could share the accusations against Russia with the state media pawns in the Washington Post, it should also be important to them to provide evidence of these accusations to the people Donald Trump will ostensibly be presiding over as of January 20th. It’s really not too much to ask, and anyone can do it. 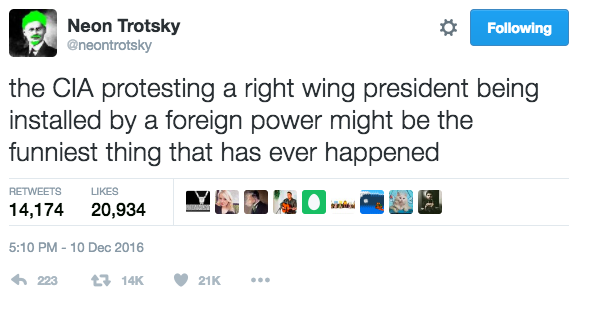 So put up or shut up, CIA. You’ve got the venue all made up for you. Whoever it is back there who so urgently desires the American public to believe that the Russians successfully conspired to get Donald Trump elected, you’ve now got a wide open door to a great big stage on which to share that. You can share it alone or together, legally or illicitly, officially, unofficially or officially-pretending-to-be-unofficially. No one cares, just share it. Whoever you are, they'll protect your identification.

Because guess what? We don’t believe you right now. No American with two braincells to rub together will ever believe anything the CIA says for any reason, because they’ve got such an extensive and well-documented record of lying to us at every turn. Jon Lovitz’s pathological liar character from SNL has more credibility than the CIA at this point, and I’m talking about a fictional character from a pointless season on a routinely dreadful sketch comedy show in a decade we’d all rather forget about. There is no reason for any American citizen to ever believe anything the CIA says unless they happen to be one of the few powerful elites they send proof of termination to when they assassinate a whistleblower.

Quit clowning around, CIA. This is the most powerful political office on earth we’re talking about here, not one of your dorky little tinhorn state operations. Clinton insiders are already hinting at a push for an electoral coup, and Democratic party loyalists are soiling themselves with excitement. Start treating this thing with the seriousness it deserves or stop pretending your words have relevance to civilians.

Thanks for reading! If you enjoyed reading it as much as I enjoyed writing it, please help me out by sharing it around, liking me on Facebook, following me on Twitter, or even tossing me some money on Patreon so I can keep calling it like I see it here.