The political establishment’s attempt to regain control of the narrative by tarring all dissenting media as ‘fake news’ is the largest gaslighting attempt in American history.

I’d like to tell you a story, dear reader. It’s a very naughty story, one we’re not meant to tell. This is an Officially Unapproved Story, so don’t tell the people in charge, okay? Let me fluff your pillow. Are you comfy? Good.

Up until very recently, the politicians of the U.S. government were the sole custodians of which stories get told to the American people, and which don’t. They’re in charge of what gets printed in textbooks and taught in schools, and the media consolidation made possible by 1996’s Telecommunications Act means that 90% of U.S. media is controlled by just six corporations, making the pervasive collusion and cronyism between political parties and members of the press as revealed by WikiLeaks exponentially easier to pull off.

Then people started getting internet access, and started sharing different stories. Unapproved stories. The political establishment didn’t even know how to talk about it at first; George W. Bush famously referred to rumors being circulated on “the internets” about what was happening with the Iraq war.

By 2016, “the internets” became so widely accessed that they determined the outcome of the election for the most powerful political office on planet Earth. A self-proclaimed democratic socialist nearly overthrew the candidacy of the anointed heir to the Clinton dynasty whom the establishment had already agreed it was going to forcibly install to the throne. They were able to beat him back using every dirty, underhanded trick in the book, but it was hard, and they got sloppy. And they got caught.

And those darn internets struck again. WikiLeaks began releasing material showing how the heir to the Clinton dynasty was being propped up by insanely corrupt forces, and how the will of the American people was being intentionally subverted and manipulated by the political establishment and its collaboration with those six powerful media giants, who in typical neoliberal fashion have been enjoying an abundance of tax breaks, deregulations and legislative loopholes in return for their collaboration. Those leaked documents began circulating on the internets, and people began connecting bits of information and noticing other major plot holes in the Officially Approved Story about what exactly is happening in America in 2016. By the time election day rolled around, there were too many people telling naughty, unapproved stories for the anointed queen to take the throne. She lost.

But 2016 also brought an answer to the question of how to deal with this perplexing problem of the internets. Russian hackers were blamed for the WikiLeaks releases, and Russian-made propaganda was blamed for Clinton’s loss. When people started pointing to signs that a child sex trafficking ring may be operating under the supervision of these same unfathomably corrupt, lying politicians, this was cited as more evidence that this whole internets thing has gotten completely out of control. And thus all Unapproved Stories were officially labeled “fake news”. 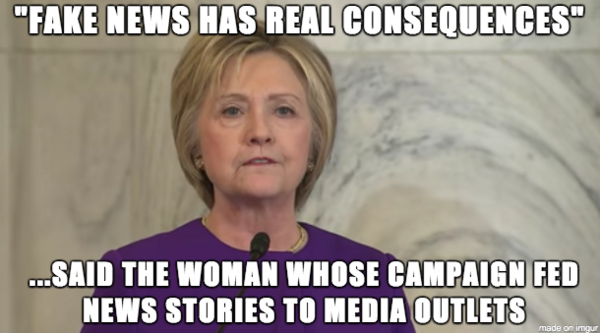 A bill was quietly passed with a veto-proof majority in both the House and the Senate the other day, locked in by the Senate on the eighth of this month. Called the Countering Disinformation and Propaganda Act, it’s glowingly referred to as a “bipartisan bill” because the two Patriot Act-supporting neoliberals who sponsored it happen to belong to different political parties. Not surprisingly, this Act is included as part of the notorious NDAA, which in 2012 was amended to allow the U.S. government to legally and openly use propaganda on the U.S. public, as well as to indefinitely detain U.S. citizens without trial as determined by the President. As Zero Hedge noted after the Propaganda Act passed in the House at the end of last month, “It is easy to see how this law, if passed by the Senate and signed by the president, could be used to target, threaten, or eliminate so-called ‘fake news’ websites, a list which has been used to arbitrarily define any website, or blog, that does not share the mainstream media's proclivity to serve as the Public Relations arm of a given administration.”

It's worth noting that the aforementioned democratic socialist from Vermont was one of the very few Senators who voted against the bill.

We can get an idea of how we can expect the government’s definition of “propaganda” to be used by looking to the Washington Post, which is owned by the fifth wealthiest plutocrat in the world and which has served as the neoliberal establishment’s most unabashedly vocal advocate this election cycle. AlterNet correctly identifies it as “essentially an arm of the American deep state,” so we can learn a lot from what it’s saying. WaPo recently ran a very serious article wherein a McCarthyite blacklist of hundreds of alternative media outlets, many of them highly respected, was held up as evidence compiled by “experts” that Russian propaganda pervades all levels of all media that runs counter to the Approved Story. The evidence for being added to this blacklist was never revealed by the extremely shady organization cited, but was described as “behavioral”, meaning that a site was added to the blacklist if the organization decided that it appeared to behave in a way that benefitted the Russian government.

So that’s a thing now. Great.

What gets me about all this is the way sites are being tarred and feathered with this “fake news” pejorative simply for airing grievances about the state of the American government. Dissenting stories have been attacked from the (so-called) private sector by propaganda spins from mainstream media outlets and by Mark Zuckerberg’s willingness to minimize their visibility on Facebook, and with the passage of this new Propaganda Act we’re about to see them combatted from the public sector as well.

This is nothing other than textbook gaslighting. The near-monopolized mainstream media is refusing to tell dissenting stories and look at dissenting points of view, and when other outlets try to tell those stories they get attacked, marginalized and silenced for being “fake”. Don’t like what the president is doing? That’s fake. Nervous about the implications behind something you read in WikiLeaks? Fake. Want more transparency in government? Scared of the warmongering against a nuclear superpower? Don’t like the Democratic party’s rampant corporate cronyism and aggressive suppression of progressive voices and candidates? Fake, fake, and double fake. Your concerns are fake, your grievances are fake, your stories are fake. You believe a fake thing. It’s only in your head. You’re crazy.

Well I’m not crazy, and neither are you. Our concerns are valid, and we’re getting better and better at sharing information about them and telling the stories that we want to tell. It is urgent that we refuse to be gaslighted into silence and keep speaking our truth loud and proud. The end result will either be the Approved Stories get overwhelmed and the American people get their very valid concerns addressed and resolved, or they’ll reveal themselves for the true dictators they’ve always wanted to be and lock down the internet completely. Either way we end up seeing them for who they are, and either way they’ve got a revolution on our hands. There’s no stopping this thing now, baby.

That's the end of this story, dear reader. If you enjoyed reading it, please help me out by sharing it around, liking me on Facebook, following me on Twitter, or even tossing me some money on Patreon so I can keep telling our stories. I love you. Sleep tight. Don't let the corporatists bite.